2020: The Intersections That Changed Us How can we better reach our community in times of crisis?

This was the question we asked ourselves and our team in light of the pandemic. Now more than ever, we realise the importance of continuing the conversation and connecting with others--even if the way we do it needs to look a little differently.

In order to continue bringing you ideas worth spreading, we made the necessary decision to go virtual and postpone our main event until 2021. With community at the heart of everything we do, it became clear that we needed a safe way to continue our mission of uncovering new ideas and sparking conversation.

As 2020 draws to a close, we want to thank you--our TEDxCapeTown community, for sticking with us on our digital journey. It’s been a year of growth as individuals, as a community, and as a planet.

How many events did you attend or tune in to?

Use the checklist below to see how engaged you were with TEDxCapeTown in 2020, or to catch up on any events you might have missed!

We kicked off 2020 with our first screening of the year at Open Streets Cape Town. Walkers, cyclists and skateboarders all came together to listen to five inspiring talks. Like-minded folks and fresh air? There’s nothing quite like it!

What does it take to be stage-ready? The American Corner was packed with energetic and passionate individuals who had some incredible ideas to bring to the table. Friends and TEDx speaker hopefuls learned about what it takes to be a speaker, and those brave enough were invited to grab the mic and share their ideas with the room. 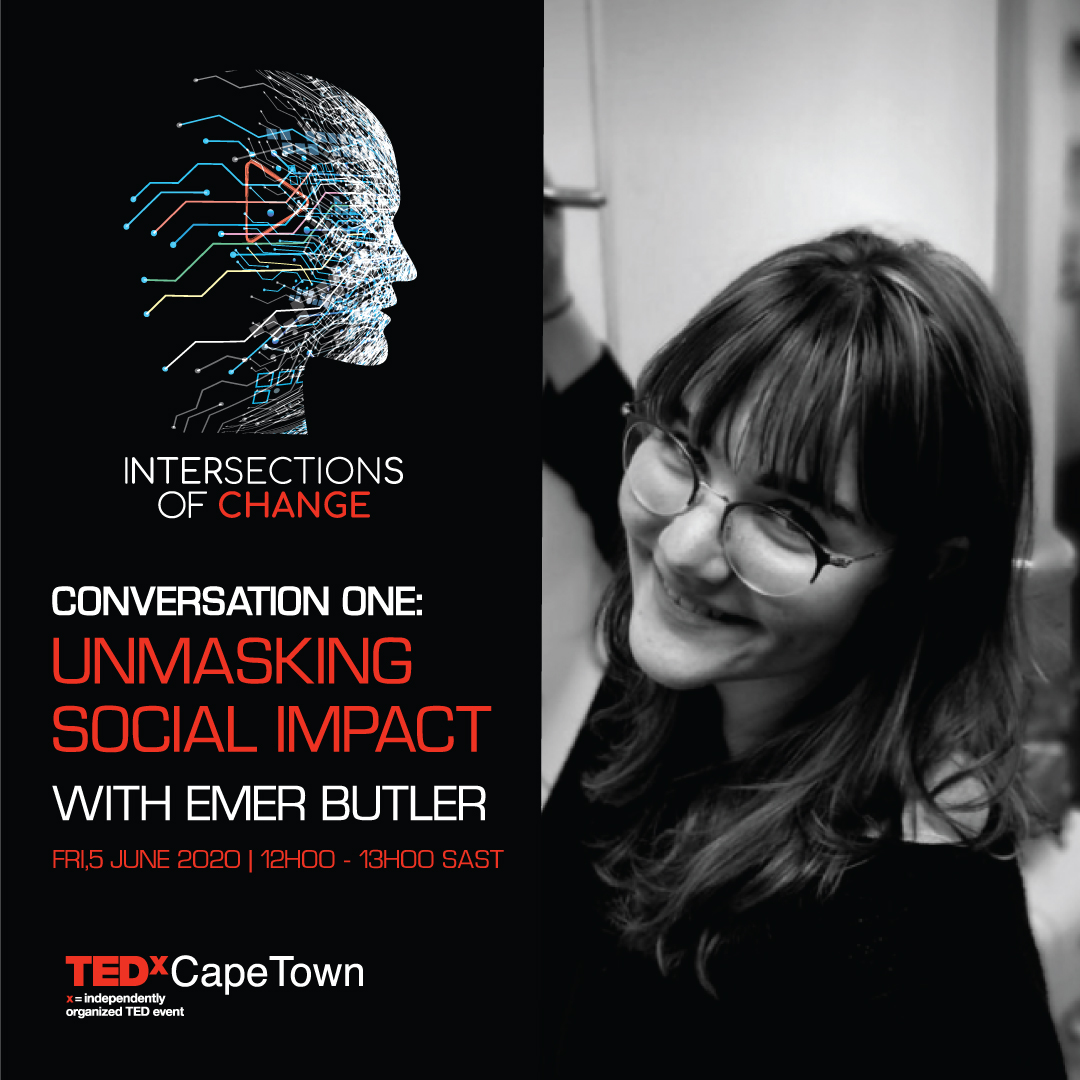 “A future of equality starts with fair access to items of basic need.” -Emer Butler

In the first of our 10-part digital series conversations, we learned how technology can be leveraged to create systems of fair access; an important step toward social equality. Emer founded an organisation to create and distribute masks, which exemplifies the power of taking positive action in uncertain times.

Catch up on the conversation:
Unmasking Social Impact with Emer Butler 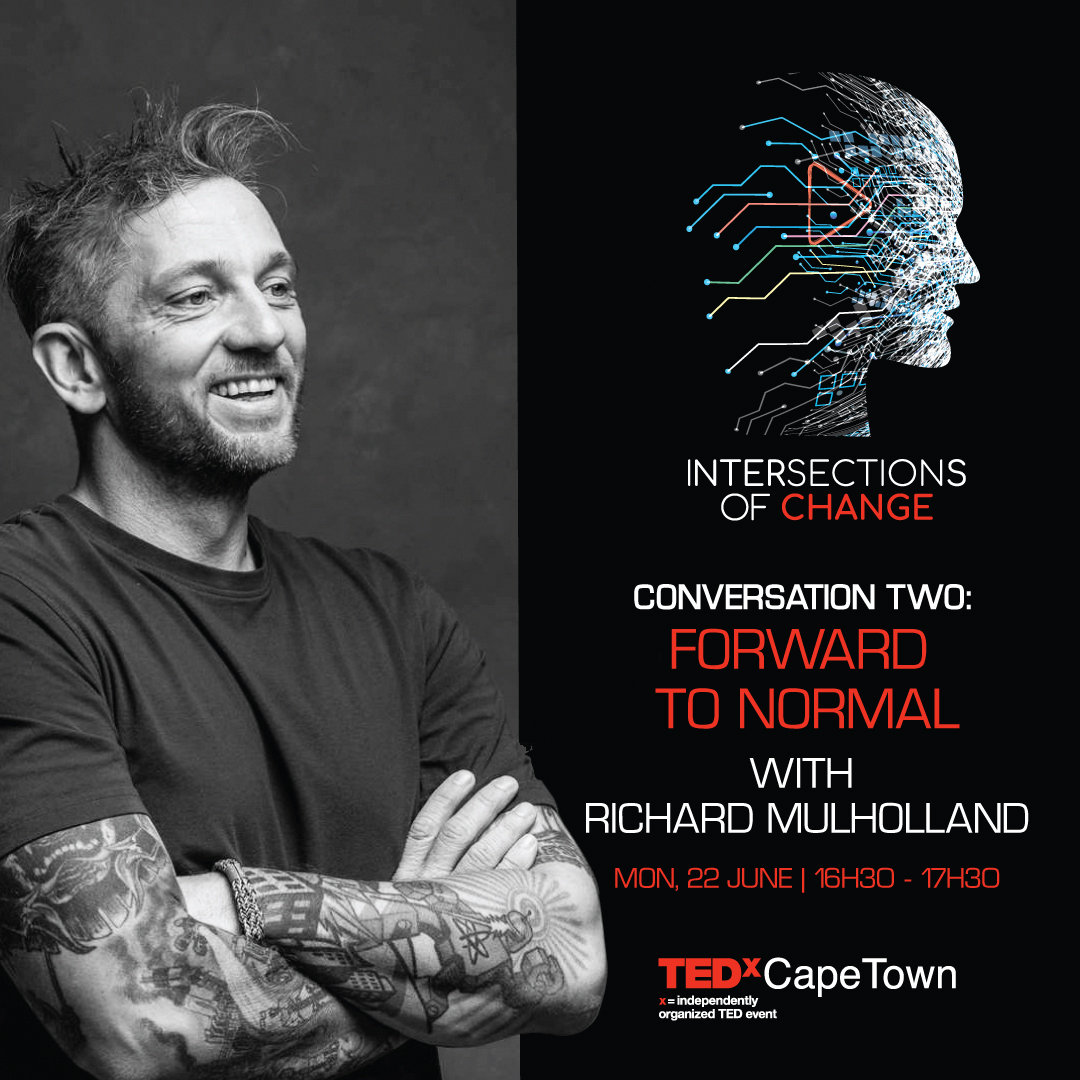 With the reality of our “new normal” setting in, our second digital conversation featured accomplished speaker, Richard Mulholland. In this conversation, Rich shared the five valuable steps he’s used to help his business move “forward to normal” in light of the pandemic.

Catch up on the conversation:
Forward To Normal With Richard Mulholland 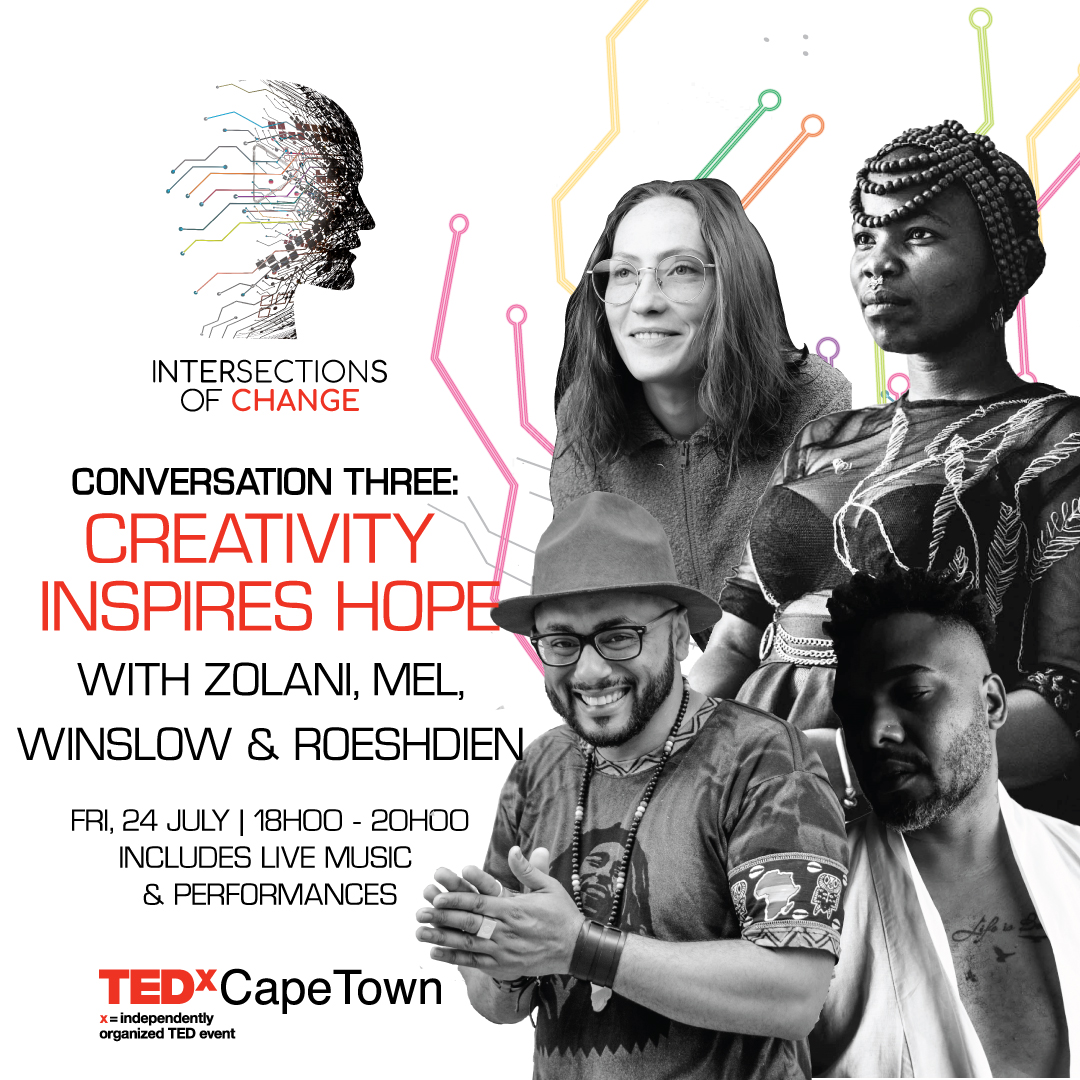 “We want to get people dreaming about the next. Feeling what it is we have learnt from this time (the pandemic), that we want to take into the next and what we want to leave behind.” -Zolani Mahola, The One Who Sings

In Conversation 3, we virtually sat down with some of South Africa’s most talented creators and changemakers. Each speaker was able to give us an intimate look into how they are finding solace and inspiration in creativity...and in themselves.

Catch up on the conversation:

Winslow Schalkwyk - What we play is life

Zolani Mahola - A conversation with ‘The One Who Sings’

20 August | Intersections of Change, Conversation 4: The Decade of WOMxN 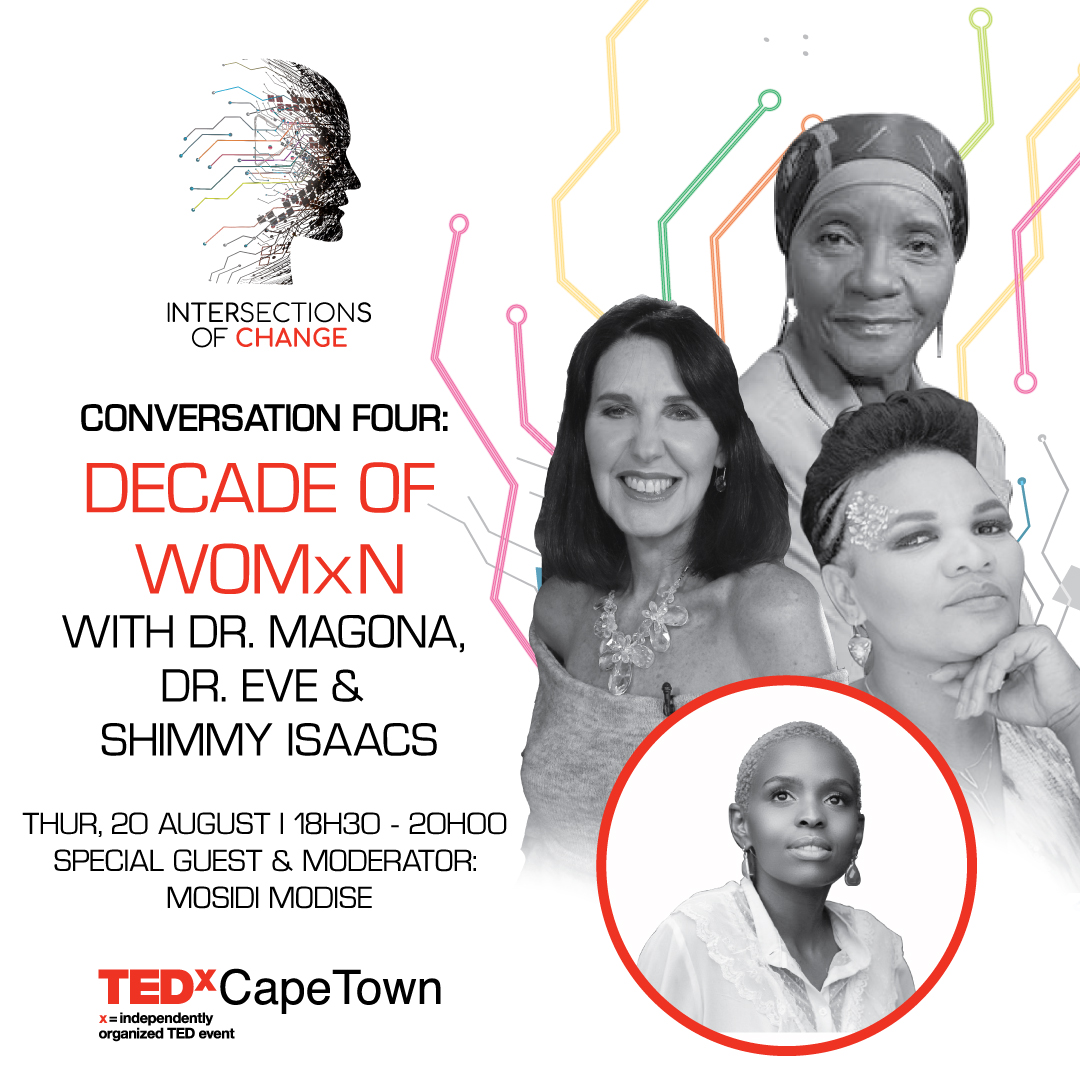 Award-winning. Artistic. Entrepreneurial. These are just a few of the words used to describe the panel of womxn we virtually met with in honour of Womxn’s Month. In this conversation, we discussed the challenges of gender inequality in society, and how we can empower the womxn of tomorrow.

Catch up on the conversation:
Decade of WOMxN with Dr. Sindiwe Magona, Dr. Eve and Shimmy Isaacs 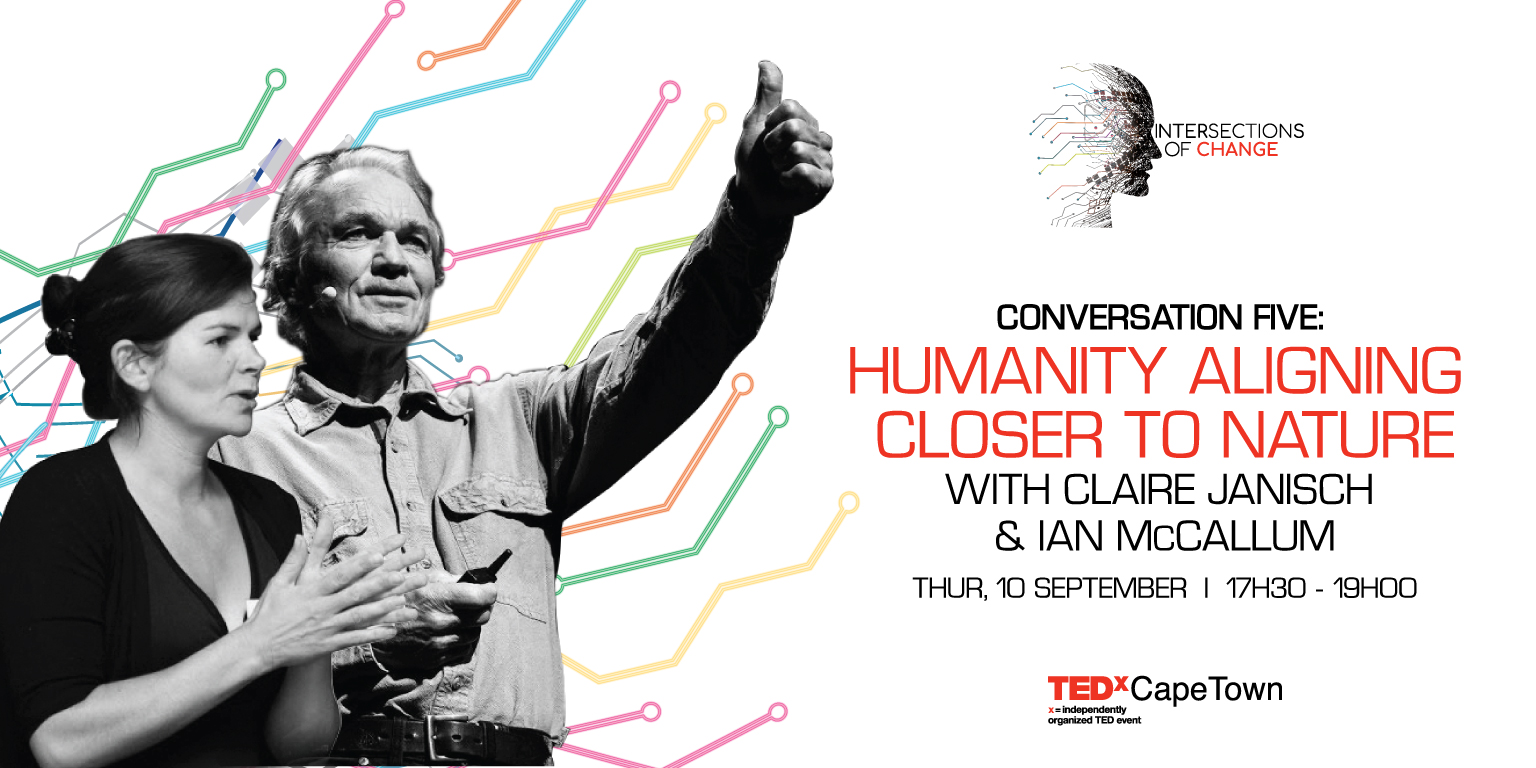 How can humanity align closer to nature post-pandemic? COVID-19 has challenged our health systems, food security, and rigid political landscapes. We were fortunate enough to pick the brains of thought leaders across various disciplines about the human disregard for our natural ecological systems, as well as what we can do to create positive change moving forward.

Catch up on the conversation:
Humanity Aligning Closer To Nature with Claire Janisch and Ian McCallum

15 October | Intersections of Change, Conversation 6: The Climate is Changing. Why Aren’t We? 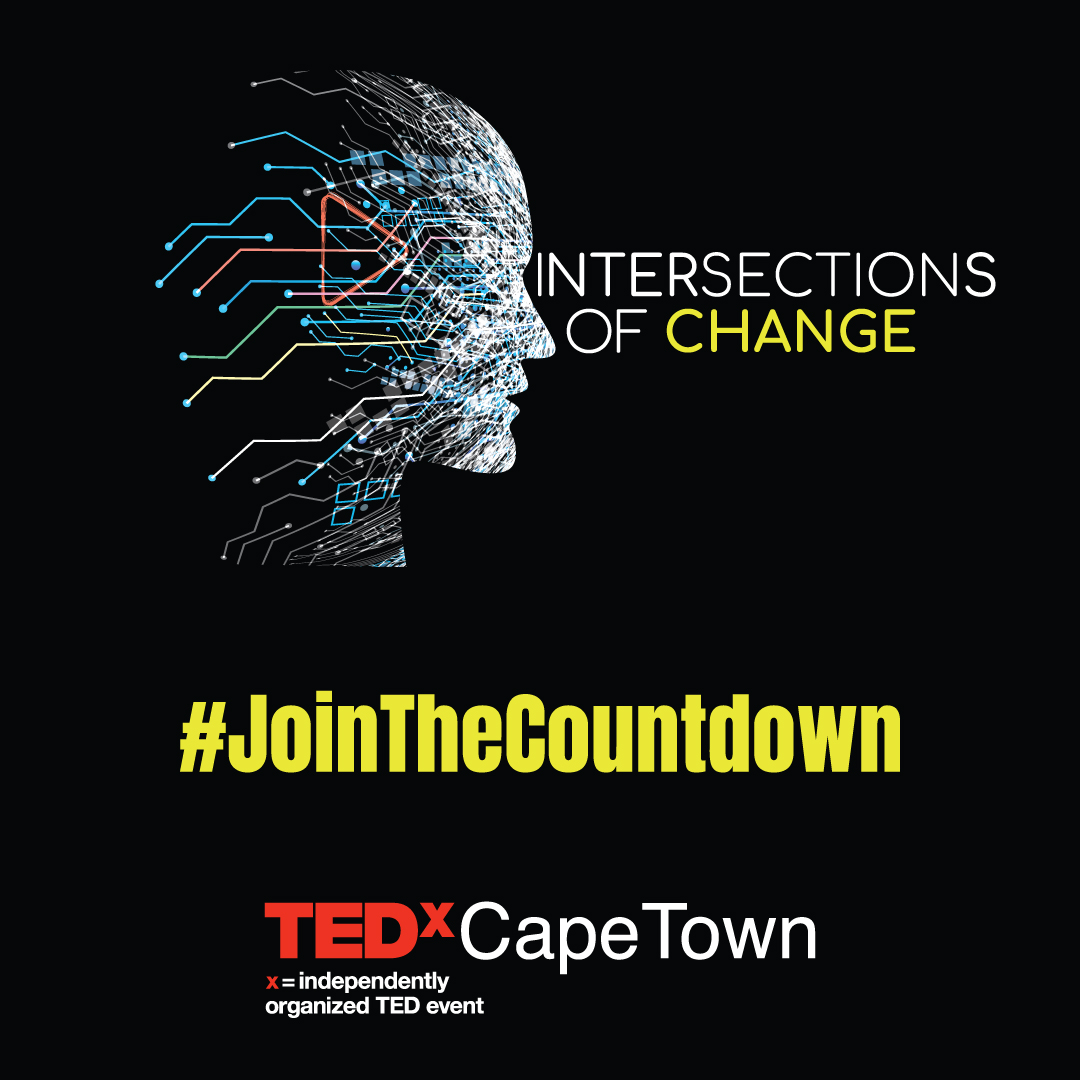 TEDxCapeTown joined the TED Countdown Summit powered by TED Global, to raise awareness on climate change and inspire action within our own community. Conversation 6 featured a two-part series of past TEDx speakers and local activists, as well as researchers and community leaders.

Catch up on the conversation:
The Climate is Changing. Why Aren't We? with Aparna Pallavi, David Parry-Davies and Khanyi Chaba

4 November | Intersections of Change, Conversation 7: How We Can Change So The Climate Doesn’t Have To 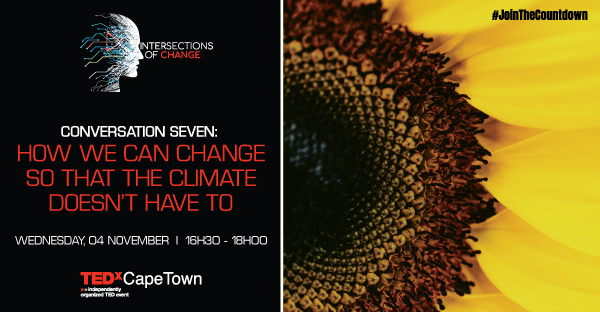 In our ongoing quest for a healthy planet, we partnered with TEDxJohannesburg to challenge you to be the next champion for climate change. We were joined by an impressive panel of unsung heroes that are paving the way to saving the place we call home. 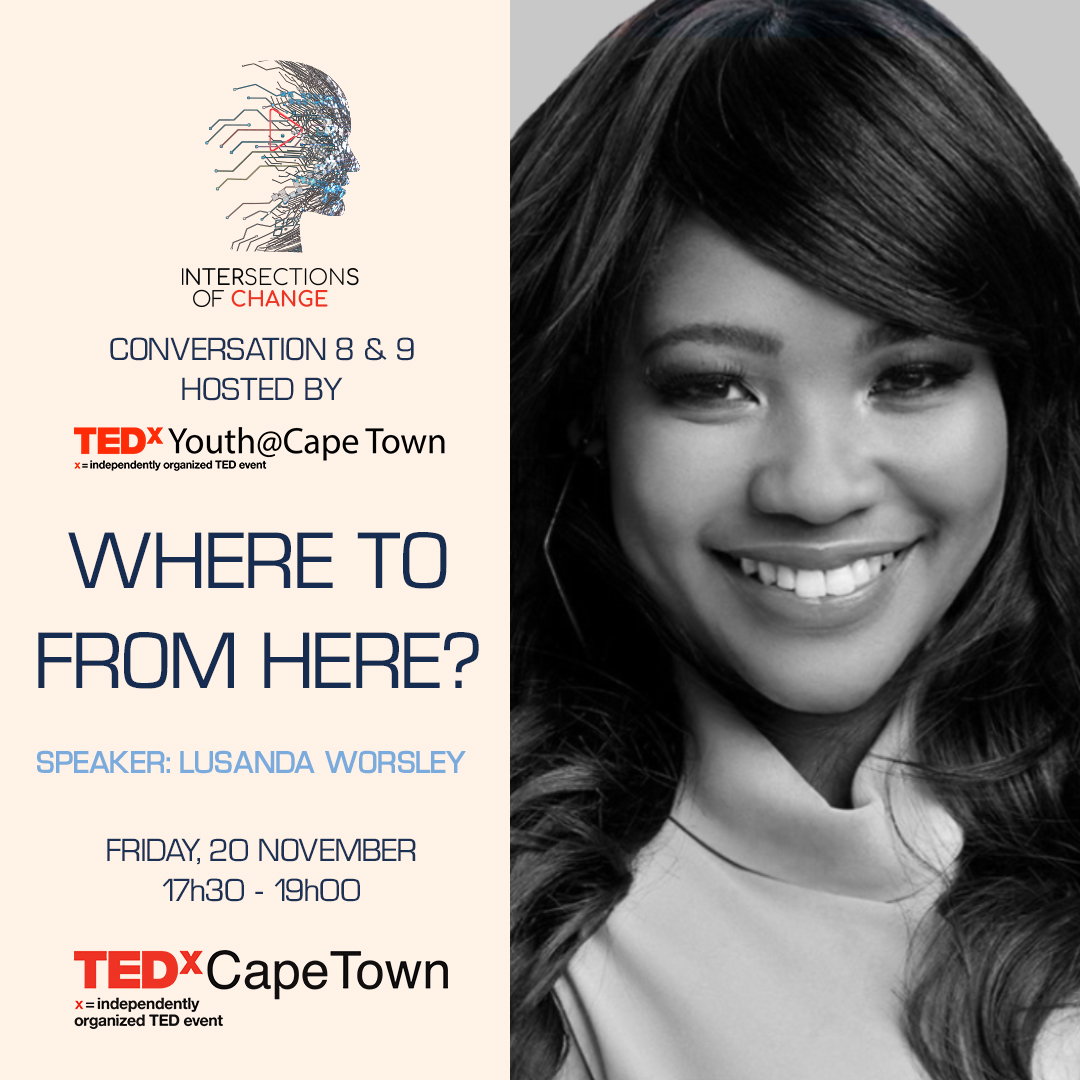 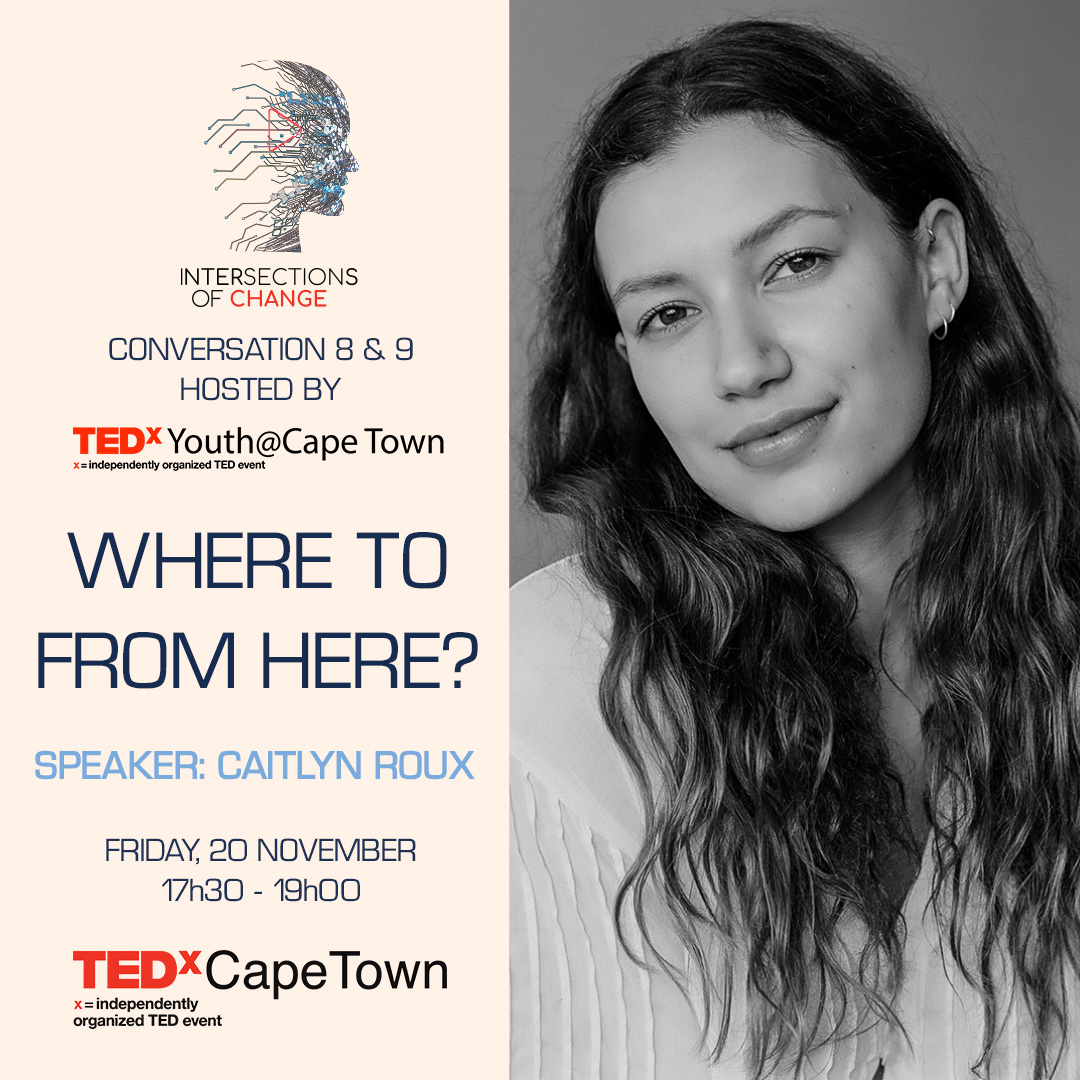 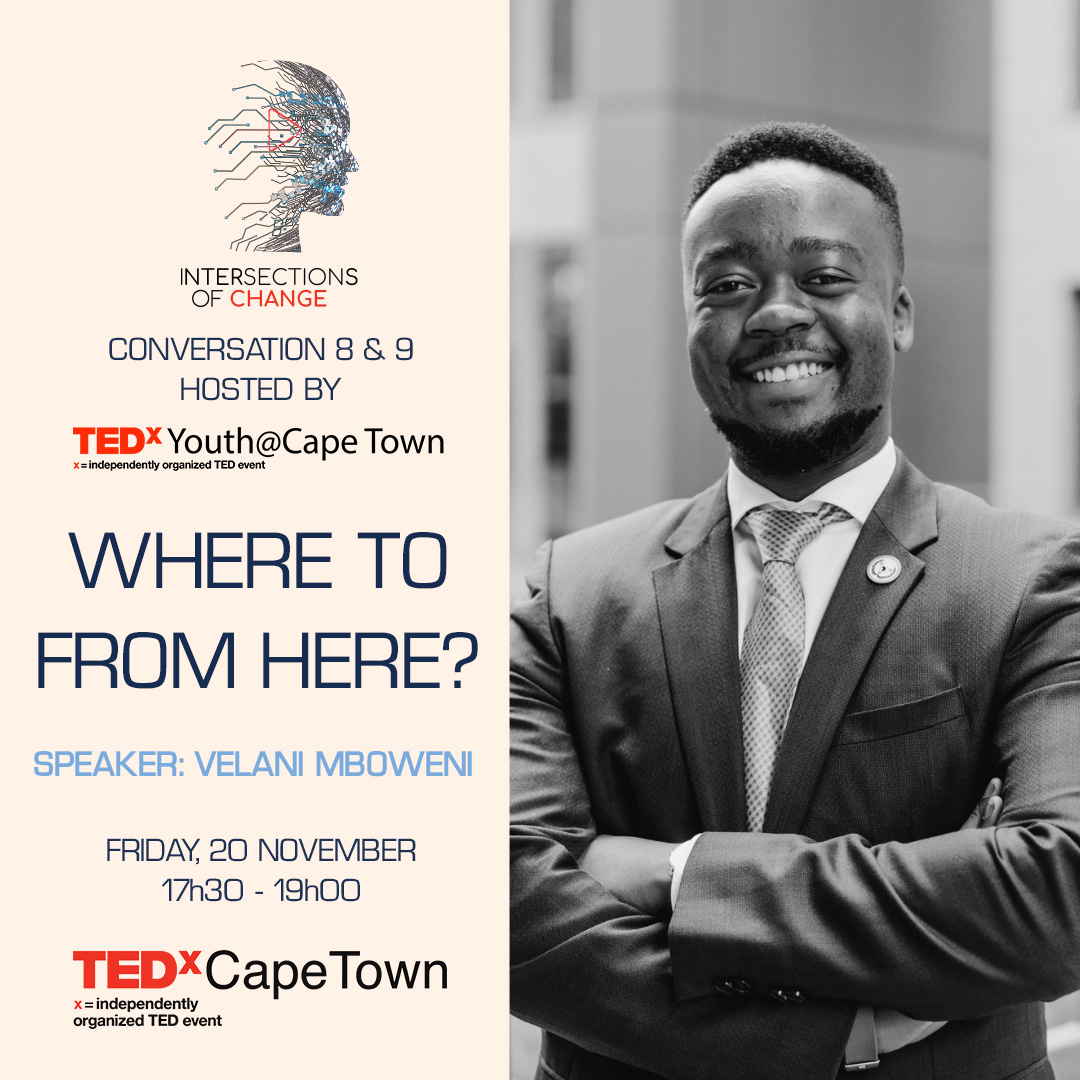 TEDxYouthCapeTown led the way in this two-part conversation centered around the ideas of believing in our dreams (and ourselves), putting in the work, and seizing opportunities. We were joined by past speakers who shared their inspirational journeys, and empowered us to take the next step toward our goals.

Catch up on the conversation:
Where To From Here? day 1 and day 2 with Vuyo Joboda, Velani Mboweni, Lusanda Worsley and Caitlyn Roux 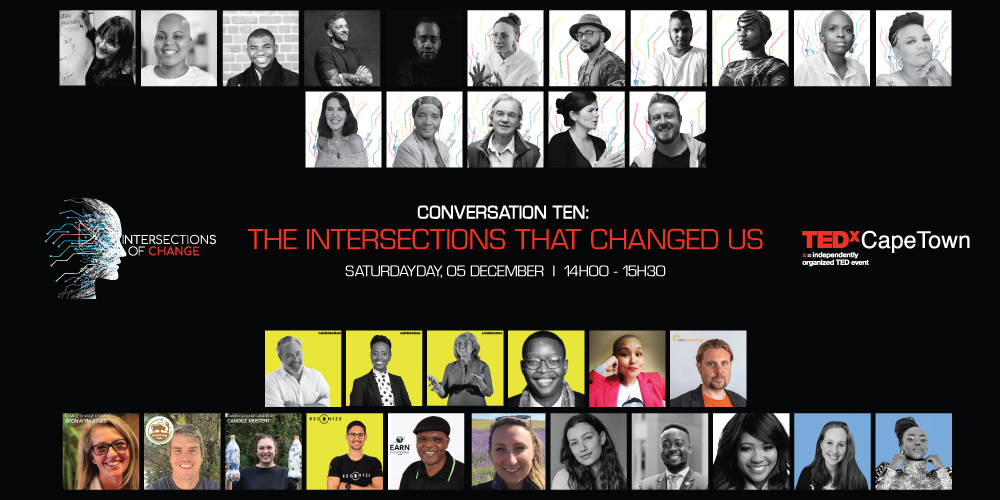 Our 10th and final conversation showcased key highlights from each of our digital conversations. From ‘Creativity Inspires Hope,’ all the way to ‘Humanity Aligning Closer to Nature,’ we explored and were re-inspired by the range of topics covered in this incredibly impactful year.

Catch up on the conversation:
The Intersections That Changed Us